Total condominium apartment sales reported through TREB's MLS® System amounted to 5,781 in Q3 2018 – up two per cent from 5,667 sales reported in Q3 2017. Conversely the number of new listings was down 2.1 per cent on a year-over-year basis. The combination of increasing sales and decreasing new listings year-over-year points to tighter market conditions, supporting the current strong annual rates of price growth.

"Recent survey results from Ipsos revealed that the vast majority of young people in the GTA are concerned about home ownership. Nearly 92% of respondents agreed that the goal of home ownership is becoming more difficult for younger people in the city. With these insights in mind, it makes sense that relatively more affordable home ownership alternatives like condo apartments have been very popular with home buyers over the past year," said Jason Mercer, TREB's Director of Market Analysis.

October 18, 2018 – Toronto Real Estate Board President Garry Bhaura announced that Greater Toronto Area REALTORS® continued to report robust average annual rent increases for condominium apartments during the third quarter 2018 compared to Q3 2017. The overall number of lease transactions for condominium apartments was also up by 5.8 per cent year-over-year to 9,215 in Q3 2018.

“Sustained population growth and low unemployment continued to drive demand for condominium apartment rentals in the GTA in the third quarter. Recent major investment announcements positively impacting the GTA economy will only further cement the demand for rental housing, as people move to the GTA to take advantage of quality job opportunities,” said Mr. Bhaura. “Policy makers, including those running for election at the municipal level, need to identify and fix existing policies that are hampering the ability to bring more rental supply on line. These same policy makers also have to develop new policies that could promote the development of more rental units moving forward,” added Mr. Bhaura.

“Average rents are continuing to increase at annual rates far beyond the rate of inflation in the GTA as rental demand remains very strong relative to the supply of units available. We will need to see a sustained period of time within which growth in the number of rental units listed outstrips growth in the number of units leased before we see the rental market return to balance. Policies like the recently expanded rent control provisions contained in the Fair Housing Plan will hinder sustained growth in the supply of rental units,” said Jason Mercer, TREB’s Director of Market Analysis.

Posted by Nat Smilis REALTOR® at 7:24 AM No comments: 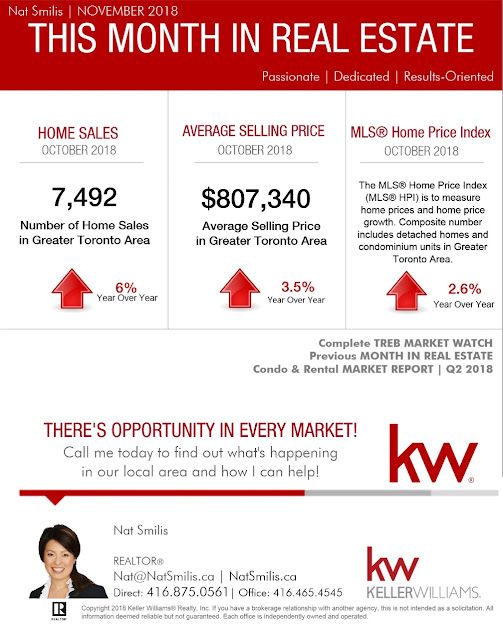 Posted by Nat Smilis REALTOR® at 6:52 AM No comments:

Greater Toronto Area REALTORS® reported 7,492 sales through TREB's MLS® System in October 2018 – a six per cent increase compared to October 2017. On a preliminary seasonally adjusted basis, sales were down by one per cent compared to September 2018.

The average sale price for October 2018 was up 3.5 per cent on a year-over-year basis to $807,340. After preliminary seasonal adjustment, the average selling price was up one per cent compared to September 2018. The MLS® Home Price Index (HPI) Composite Benchmark was up by 2.6 per cent compared to October 2017. Price growth continued to be driven be the condominium apartment and higher density low-rise market segments.

"Annual sales growth has been positive since the late spring. While the OSFI stress test and higher borrowing costs have kept sales below 2016's record pace, many households in the Greater Toronto Area remain upbeat on home ownership as a quality long-term investment. A strong regional economy and steady population growth will continue to support the demand for housing ownership as we move into 2019," said Mr. Bhaura.

There were 14,431 new Listings entered into TREB's MLS® System in October 2018 – down 2.7 per cent compared to October 2017. The fact that sales were up and new listings were down year-over-year in October suggests that market conditions became tighter.

"Annual sales growth has outstripped annual growth in new listings for the last five months, underpinning the fact that listings supply remains an issue in the Greater Toronto Area. With municipal elections in the rear view mirror, all levels of government need to concentrate on policies that could remove impediments to a better-supplied housing market, including facilitating the development of a broader array of medium density housing choices," said Jason Mercer, TREB's Director of Market Analysis.


Posted by Nat Smilis REALTOR® at 6:39 AM No comments: