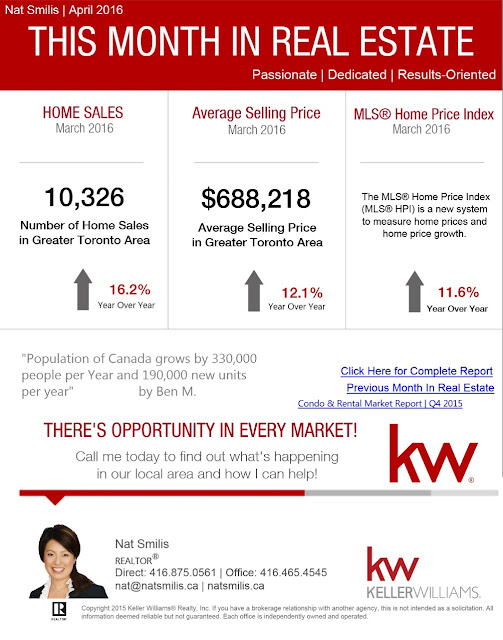 Posted by Nat Smilis REALTOR® at 6:27 PM No comments:

January 27, 2016 - Toronto Real Estate Board President Mark McLean announced that Greater Toronto Area REALTORS® reported 5,595 condominium apartment sales through TREB's MLS® System during the fourth quarter of 2015. This result was up by 12.6 per cent compared to the same period in 2014.

Over the same period of time, the number of new condominium apartment listings entered into TREB's MLS® System was also up, but by a substantially lower annual rate compared to sales, at 3.3 per cent. The result was tighter market conditions compared to a year earlier.

"The condominium apartment segment is integral to the overall housing market in the Greater Toronto Area. Over the past decade, the trend has been to increasingly build up due to provincial land use policies. As new projects have completed, a number of investor-held units have been listed for sale on TREB's MLS® System. These units have been absorbed quite rapidly, with enough demand relative to supply to prompt continued price growth," said Mr. McLean.

The average selling price for condominium apartments in the fourth quarter was up by 4.1 per cent year over year to $382,070. Throughout the fourth quarter, the MLS® Home Price Index (HPI) Apartment Benchmark Price was up by between four and six per cent on an annual basis.

"First-time buyers account for approximately half of all buyers in the GTA and even more so in the City of Toronto. Condominium apartments represent an important entry point into home ownership for a lot of households. This is a key reason why we experienced continued growth in sales for this home type over the past year," said Jason Mercer, TREB's Director of Market Analysis.

January 27, 2016 - Toronto Real Estate Board President Mark McLean announced that Greater Toronto Area REALTORS® reported 6,073 condominium apartment rentals through TREB’s MLS® System in the fourth quarter of 2015. This result represented a substantial 20.7 per cent increase compared to 5,032 rentals reported in Q4 2014. “While the ownership market is often top-of-mind when we think about condominium apartments in the GTA, it is important to remember that investor-held condos have become an increasingly important source of rental supply. Renters looking for mid- to high-end units have tended to be pointed at condo rentals. Strong demand resulted in tighter market conditions in Q4,” said Mr. McLean. Year-over-year growth in rental transactions outstripped growth in the number of units listed during the quarter. This suggests that competition between renters increased, which explains above-inflation rent increases for one- and two-bedroom condo apartments. “Tighter rental market conditions resulted in strong increases in average rents compared to last year. Looking forward into 2016, expect rent growth to remain strong if we continue to see growth in the number of transactions outpace growth in the number of units listed for rent,” said Jason Mercer, TREB’s Director of Market Analysis.
Posted by Nat Smilis REALTOR® at 8:52 AM No comments:

The positive annual growth in sales was not mirrored on the listings front. The number of new listings entered into TREB's MLS® System during March and the first quarter were down compared to the same periods in 2015.

"At the beginning of 2016, TREB's outlook for the year pointed to a strong possibility of a second consecutive record year for home sales. This outlook was based, in part, on upbeat consumer survey results pointing to robust home buying intentions. It is clear that these upbeat intentions have translated into record first quarter results," said Mr. McLean.

The MLS® Home Price Index Composite Benchmark for March 2016 was up by 11.6 per cent compared to March 2015. The average selling price for all home types combined was up 12.1 per cent year-over-year in March and 13.6 per cent in the first quarter.

"Demand was clearly not an issue in the first three months of 2016, regardless of the housing market segment being considered. The supply of listings, however, continued to aggravate many would-be home buyers. We could have experienced even stronger sales growth were it not for the constrained supply of listings, especially in the low-rise market segments. The resulting strong competition between buyers has underpinned the double-digit rates of price growth experienced so far this year," said Jason Mercer, TREB's Director of Market Analysis.
Posted by Nat Smilis REALTOR® at 8:21 AM No comments: