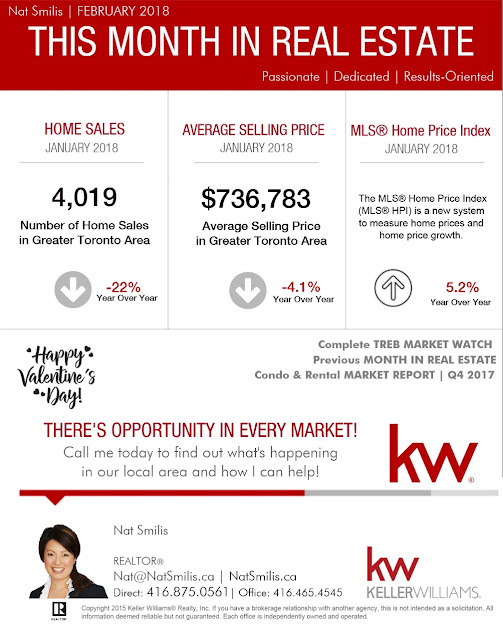 Posted by Nat Smilis REALTOR® at 3:45 PM No comments:

January 22, 2018 -- Toronto Real Estate Board President Tim Syrianos announced that Greater Toronto Area REALTORS® reported 5,773 condominium apartment sales through TREB's MLS® System in the fourth quarter of 2017. This result was down by 15.4 per cent compared to the last three months of 2016.

Over the same period, new condominium apartment listings were up by 9.8 per cent to 8,186. While sales were down relative to listings, market conditions still remained tight, with a sales-to-new listings ratio of 70 per cent.

"Demand for condominium apartments remained strong relative to listings in the fourth quarter. Even with the uptick in listings, which was certainly welcome, there was enough competition between buyers to prompt double-digit annual rates of price growth. This points to the fact that we still do have a supply problem in the GTA that needs to be addressed to ensure the long term sustainability of the marketplace," said Mr. Syrianos.

The average selling price for condominium apartments was up by 17.9 per cent year-over- year in the fourth quarter to $515,816. While this annual rate of growth was down from earlier in 2017, the condominium apartment segment was still the leader in terms of price growth in the second half of the year.

"Seller's market conditions remained in place for the condominium apartment market segment in the fourth quarter. Based on price point, this housing type remains top of mind for many first-time buyers. In addition, as home prices have grown year-over-year some buyers who initially may have considered the purchase of a low-rise home have chosen to purchase a condo apartment as well," said Jason Mercer, TREB's Director of Market Analysis.

January 22, 2018 – Toronto Real Estate Board President Tim Syrianos announced that average rents for one-bedroom and two-bedroom condominium apartment rents were up very strongly on a year-over-year basis in the fourth quarter of 2017, based on transactions reported by Greater Toronto REALTORS® through TREB’s MLS® System.

“As the population in the GTA continues to grow, so too does the demand for rental accommodation. The problem is that rental supply has not kept up with the increase in demand in recent years. The result has been low vacancy rates and intense competition between renters for available units. This competition has underpinned very strong growth in average rents,” said Mr. Syrianos. The number of condominium apartments listed during the fourth quarter was down by 3.4 per cent compared to Q4 2016.

“Looking forward, we continue to have concerns that rent control legislation announced in conjunction with the Ontario Fair Housing Plan will preclude additional rental supply coming on stream, both in the purpose-built and investor-held condominium apartment segments. Going further, it is possible that current owners of condominium apartments could choose to list their units for sale to take advantage of recent price gains rather than rent their units to tenants under the new rent control regime,” said Jason Mercer, TREB’s Director of Market Analysis.
Posted by Nat Smilis REALTOR® at 10:55 AM No comments:

Posted by Nat Smilis REALTOR® at 2:34 PM No comments: