TORONTO, October 24, 2016 – Toronto Real Estate Board President Larry Cerqua announced that condominium apartment sales reported through TREB’s MLS® System in the third quarter of 2016 were up by 22.1 per cent on a year-over-year basis to 8,014. Over the same period, new listings for condominium apartments were down by 13.3 per cent. “While the low-rise market has been top-of-mind in the supply discussion, it is very important to note that supply pressures have also been experienced in the condominium apartment market segment over the past year. The completion of new units was down substantially during the first three quarters of 2016 compared to the same period in 2015. This arguably played a role in the decline in new condominium apartment listings on TREB’s MLS® System,” said Mr. Cerqua. The average price of a condominium apartment in the Q3 2016 was $415,643 – up 9.6 per cent compared to Q3 2015. The MLS® Home Price Index (HPI) apartment benchmark price was up by a similar amount on an annual basis throughout the third quarter. “The annual rate of condominium apartment price growth has accelerated over the past year as the supply of units available for sale became more constrained while demand remained strong. With this said, however, annual rates of price growth remain well-below those for low-rise home types. Condo apartments continue to be an affordable entry point into home ownership for first-time buyers,” said Jason Mercer, TREB’s Director of Market Analysis.

TORONTO, October 24, 2016 – Toronto Real Estate Board President Larry Cerqua announced that the number of lease agreements signed for condominium apartments listed on TREB’s MLS® System was down by 4.8 per cent on a year-over-year basis to 9,164 in the third quarter of 2016 compared to 9,629 a year earlier. Over the same period, the number of condominium apartments listed for rent was down by a greater annual rate of 17.3 per cent. “Demand remains very strong for condominium apartments in the Greater Toronto Area. The key issue in the third quarter was the fact that there was a pronounced decline in the number of units available for rent. The dip in the supply of available rental units can be attributed, at least in part, to fewer condominium project completions during the first three quarters of 2016 compared to last year. This suggests that there were fewer newly completed investor-held units available for rent,” said Mr. Cerqua. Average one-bedroom and two-bedroom condominium apartment rents were up substantially in the third quarter compared to 2015. The average one-bedroom rent was up by 7.2 per cent to $1,777. The average two-bedroom rent was up by 7.9 per cent to $2,419. “Conditions in the condominium apartment rental market tightened substantially in the third quarter, with listings down on a much greater basis relative to rental transactions. This means that competition between renters was enhanced, which fed through into average rent increases well-above the rate of inflation,” said Jason Mercer, the TREB’s Director of Market Analysis.
Posted by Nat Smilis REALTOR® at 7:16 AM No comments: 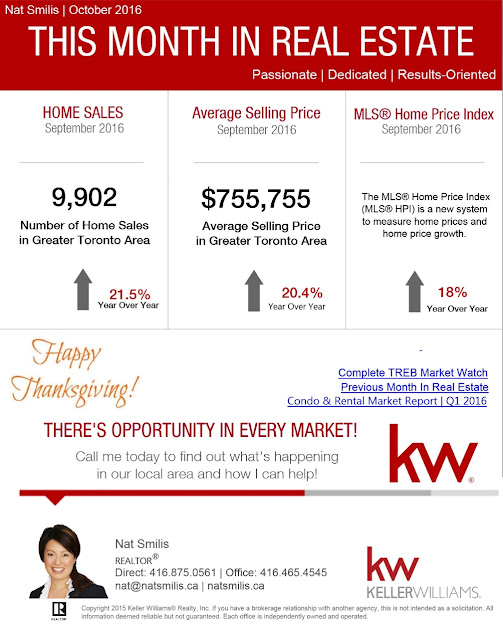 Posted by Nat Smilis REALTOR® at 4:50 PM No comments:


October 5, 2016 -- Toronto Real Estate Board President Larry Cerqua announced that Greater Toronto Area REALTORS® reported 9,902 sales through TREB's MLS® System in September 2016. This result was up by 21.5 per cent compared to September 2015.

For the region as a whole, strong annual rates of sales growth were experienced for all major home types. The pace of detached sales growth was slower in the City of Toronto and the number of semi-detached sales was down compared to last year. In both cases, the year-over year dip in new listings was likely the issue.

"We continued to see strong demand for ownership housing up against a short supply of listings in the Greater Toronto Area in September. The sustained lack of inventory in many neighbourhoods across the GTA continued to underpin high rates of price growth for all home types," said Mr. Cerqua.

"The Toronto Real Estate Board will be closely monitoring how the recent changes to Federal mortgage lending guidelines and capital gains tax exemption rules impact the housing market in the Greater Toronto Area. While these changes are pointed at the demand for ownership housing, it is important to note that much of the upward pressure on home prices in the GTA has been based on the declining inventory of homes available for sale," said Jason Mercer, TREB's Director of Market Analysis.
Posted by Nat Smilis REALTOR® at 9:10 AM No comments: