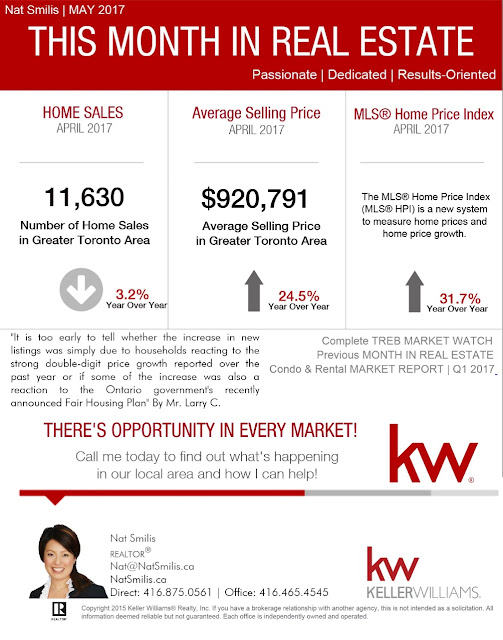 Posted by Nat Smilis REALTOR® at 12:55 PM No comments:

April 25, 2017 -- Toronto Real Estate Board President Larry Cerqua announced that Greater Toronto Area REALTORS® reported a double-digit annual increase in condominium apartment sales in the first quarter of 2017. A total of 7,251 condominium apartments changed hands through TREB's MLS® System during the first three months of 2017 – up 21.7 per cent compared to the same period in 2016.

Over the same period of time, the number of new condominium apartment listings entered into the MLS® System was down by 18.8 per cent to 9,036 compared to 11,123 new listings a year earlier.

"Condominium apartments have historically been the housing type of choice for many first-time buyers due to the relatively lower price point compared to groundoriented housing options. Given that more than half of intending home buyers are expected to be first-time buyers in 2017, according to a recent Ipsos poll conducted for TREB, it makes sense that demand for this housing type has remained strong," said Mr. Cerqua.

"Market conditions became much tighter in the condominium apartment segment over the past year, with sales accounting for a greater share of listings. As competition between buyers increased further, the pace of price growth accelerated," said Jason Mercer, TREB's Director of Market Analysis.

The number of condominium apartments listed for rent at some point during the first quarter was up on a year-over-year basis, but by less than one per cent.

“As the population and, by extension, number of households continues to grow in the Greater Toronto Area, the demand for housing increases. Some of this demand is pointed at the rental market, including condominium apartments that owners have chosen to rent out to tenants. The problem is that the supply of units available for rent has not kept up with demand, leading to more competition between renters and strong upward pressure on average rents,” said Mr. Cerqua.

“It is important to remember that the rental market meets the housing needs for a substantial number of GTA residents, including newcomers to Canada who choose to settle in the region. As a result, the rental market often falls under the public policy lens. Policies pointed at the rental market should be based on solid empirical evidence and should not hamper the supply of rental listings, which has been the main issue impacting renters over the last year,” said Jason Mercer, TREB’s Director of Market Analysis.
Posted by Nat Smilis REALTOR® at 7:54 AM 1 comment: 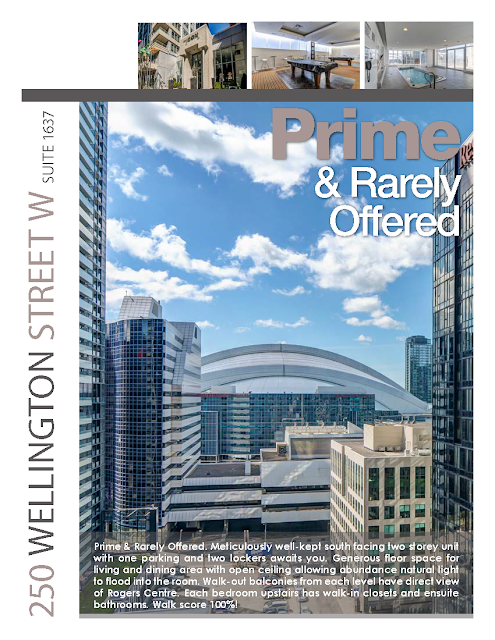 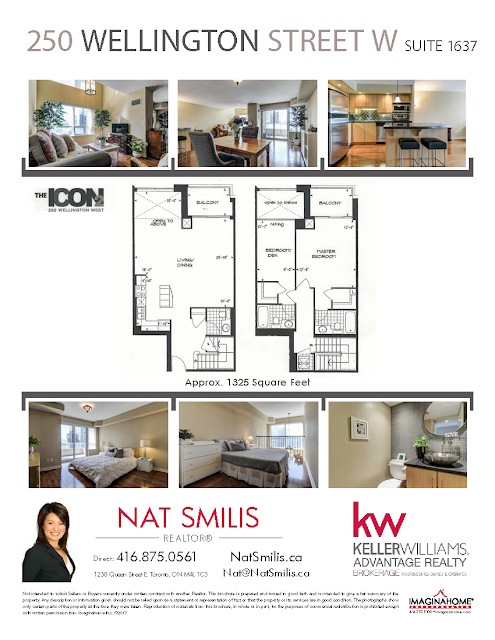 Call me TODAY for a Private Viewing and Details!

May 3, 2017 -- Toronto Real Estate Board President Larry Cerqua announced that Greater Toronto Area REALTORS® entered 33.6 per cent more new listings into TREB's MLS® System in April 2017, at 21,630, compared to the same month in 2016. New listings were up by double-digits for all low-rise home types, including detached and semi-detached houses and townhouses. New listings for condominium apartments were at the same level as last year.

Total sales for the TREB market area as a whole amounted to 11,630 – down 3.2 per cent year-over-year. One issue underlying this decline was the fact that Easter fell in April in 2017 versus March in 2016, which resulted in fewer working days this year compared to last and, historically, most sales are entered into TREB's MLS® System on working days.

"The fact that we experienced extremely strong growth in new listings in April means that buyers benefited from considerably more choice in the marketplace. It is too early to tell whether the increase in new listings was simply due to households reacting to the strong double-digit price growth reported over the past year or if some of the increase was also a reaction to the Ontario government's recently announced Fair Housing Plan," said Mr. Cerqua. The MLS® Home Price Index (HPI) Composite Benchmark Price was up by 31.7 per cent year-over-year in April 2017. Similarly, the average selling price for all home types combined was up by 24.5 per cent to $920,791.

"It was encouraging to see a very strong year-over-year increase in new listings. If new listings growth continues to outpace sales growth moving forward, we will start to see more balanced market conditions. It will likely take a number of months to unwind the substantial pent-up demand that has built over the past two years. Expect annual rates of price growth to remain well-above the rate of inflation as we move through the spring and summer months," said Jason Mercer, TREB's Director of Market Analysis.

Posted by Nat Smilis REALTOR® at 10:41 AM No comments: